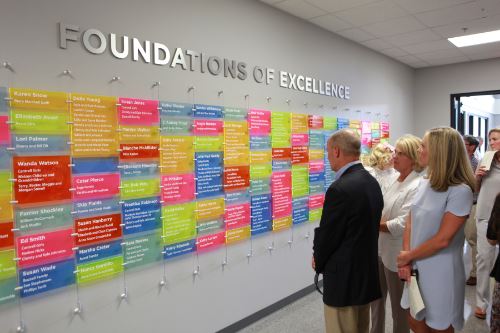 "I sometimes tell people that the world of advancement found me." Kathleen Medlin began her career in healthcare administration and worked in the field of healthcare marketing, communications, and community relations for 15 years for Quorum and HCA hospitals in Georgia and Alabama. Higher ed came calling in 2005 and she worked for almost two years for Wesleyan College in their Office of Communications. Then, she received a phone call in late 2007 that changed the trajectory of her career. Stratford, Kathleen's alma mater and her children's school, asked her to be a part of their communications team. That role lasted about six months before she began serving as Stratford's Director of Advancement. "It has been an honor for me to hold this position since 2008. I love this school community and am amazed daily by the students who walk our halls," Kathleen remarks.

While doing her internship in college, Kathleen spent a semester with one of the best hospital CEOs in the business at the time. She says, "I learned so much about leadership from him, and I have seen his advice play out in so many aspects of my professional and volunteer experiences. One of the phrases he shared I repeat often with co-workers. 'We work with people and for an organization or cause.' That's really at the heart of my leadership style --- collaborating with those around me and pulling the best traits or knowledge from each other to produce a rich product or experience."

Kathleen's favorite thing about Stratford is the students! She loves getting to know our students and hearing them talk about their passions, frustrations, plans for the future, and lives outside of school. One of her roles in Advancement is serving as the school's alumni director. Recently, she attended the class of 2017 five-year reunion. She was greeted by a loud collective "Mrs. Medlin!" and many hugs and smiles. Kathleen spent the next hour chatting with them about where life had taken them and where they were headed. Experiences like that reaffirm everything she does for Stratford.

Kathleen is 1988 Stratford graduate. After graduation, she attended Auburn University where she received her B.S. in Healthcare Administration.

Payment is available by Credit Card, Check, or by Charging Your Account