Established in 1993, the purpose of SISL is to provide a safe, fun environment in which children in grades Pre-K (not 3K/beginners) through 5 are introduced to the joys of playing soccer. By having current Stratford student-athletes coach the school’s next generation, we hope to provide strong role models as well as maintain the tradition of excellence that has been inherent in the program since its inception. Further, we endeavor to transfer that special sense of belonging—of being a part of something unique and exciting—to children and their parents new to the sport and/or the school. For those families with children well-acquainted with soccer, we look forward to encouraging your budding stars to continue their positive experience at the next level, whether it be recreational, select or just kicking it in the backyard with friends.

Pre-Kindergarten
2:00-3:30pm
Pictures will start at the beginning and then we will move into the games
*please be sure to arrive on time so they do not miss pictures
1st-2nd, 3rd-5th Grade Groups
3:00-4:30pm
Pictures will start at 3:00 - meet next to the scoreboard
OTHER NOTES
• Shirts will be handed out this Friday to homeroom advisors - if your child does not receive them then we will have them at the field on Sunday.
• Players should bring their own water bottle – we are unable to provide water due to COVID.
• The practice field and the playground will be off-limits as they are preparing to lay the new turf down - all activities will be played on the game field.
• Please help keep kids away from the practice field as well as any construction equipment at the field.
• Everyone should plan to park in the tennis parking lot and use the main entrance to the soccer field only.
• Parents are welcome to use the spectator stands.

Coach Blankenship is a proud graduate of Stratford Academy, class of 2006. She won four state championships while playing soccer at Stratford, captaining the team in 2005 and 2006. She went on to play collegiately at the University of Alabama Birmingham. While playing at UAB, she won a conference championship, was named CUSA player of the week twice and was named to the CUSA All-tournament Team. She played in the W-League for the New York Magic Organization in 2009. Coach Blankenship began her coaching career while still in college, coaching a local high school in Birmingham. She continued her coaching career at Stratford in 2011 before moving to the collegiate level. She coached 4 years at the Division I level at Indiana State and then her alma mater- UAB. In 2015, she returned to Stratford to become the head coach for the girls’ soccer program. Her coaching accomplishments include Macon Telegraph Coach of the Year in 2015, SWEGA All-Star Coach in 2015 and 2016, as well as being named to coach in the DiVarsity All-Star game in 2015. She was inducted into the NSCAA’s 30 under 30 class in 2015 and was named by the National Soccer Coaches Association of America as one of the top soccer coaches in the country under 30 years old. 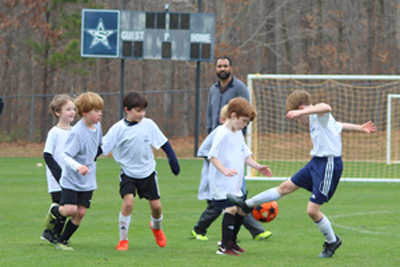 Coach Jones is a proud graduate of Stratford Academy, class of 1996. He won two state championships in 1992 and 1995, captaining the team his junior and senior year, as well as being selected the Ben Bowden All-Middle Georgia Player of the Year his senior year.

After high school he went onto Brewton-Parker College and later Queens University of Charlotte. He played for two seasons before becoming the goalkeeper and assistant coach at Queens. He helped train a future Division II All-American and helped lead the team to the NCAA tournament in 1999. Jones also assisted at South Mecklenburg High school during his Charlotte Years.

In 2003 he decided to follow his passion after a few years in the real world and pursue a coaching career. He moved back to Macon and quickly established himself in the soccer community. In 2004 he was the interim coach at Stratford Academy with fellow ’96 graduate Jeremy McClure and helped lead the girls to their ninth consecutive state title. In 2005 he was named the head boys and girls coach at Mount de Sales Academy. There he won four state titles, was runners-up four times and compiled over 300 wins with both programs. He was selected Macon Telegraph Coach of the Year twice.

In 2019, he decided to jump on the opportunity to return to his alma mater where he once played. He currently holds the United Soccer Coaches Association National and Advanced National Degrees. He also holds the state and regional goalkeeper degrees. Coach Jones is excited to be back home at Stratford.

In 2006, Stratford Intramural Soccer League, commonly known as SISL, began the SISL Long Term Commitment Award. Each year the seniors who have donated their time for every year of eligibility are recognized for their gift to Stratford Soccer. This gift of time demonstrates these students' enthusiasm for Stratford and Stratford Soccer.

Past recipients of the SISL Long Term Commitment Award: