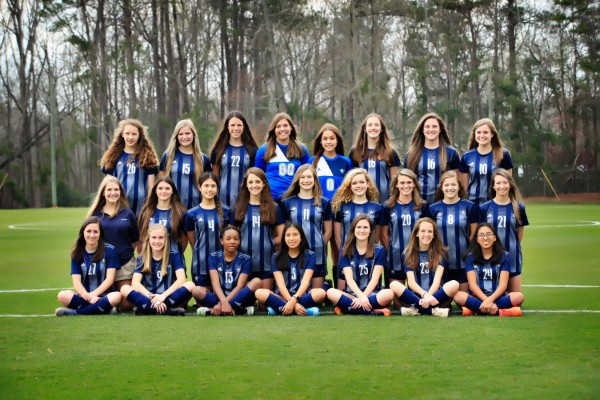 Girls’ Soccer at Stratford Academy has had an impressive history filled many traditions throughout the years. The girls’ soccer program started in 1995, and in the second year the 1996 team went on to win the GISA AAA State Championship. The girls went had a 15-0 season, allowing only one goal on its way to capturing the state title. They finished the season ranked 17th in the nation by Umbro/NSCAA National High School Poll. The girls’ program went on to win an unprecedented 11 State titles in a row from 1996 to 2006. During that time the girls’ program saw several national rankings, notably, the 2005 team finished the season ranked 15th in the country by the NSCAA/Adidas National Rankings, reaching as high as 14th at one point in the season. The Eaglettes added three more State titles in 2010, 2011 and 2013. This took the tally of state championships to fourteen. Stratford made its move to the GHSA in 2014-2015. Since moving to the GHSA, the Eaglettes reached back to back Final Fours in 2015 and 2016. To date Stratford has never been beaten in the GHSA playoffs by anyone other than the eventual State Champion. From 1995-2014 there have been 66 girls’ soccer players with All-State Honors. The program has had 18 girls move on to play at the collegiate level. Recent notable rankings- in 2016 our girls’ team was ranked as high as 36th in the nation by Maxpreps.

There are no events to display