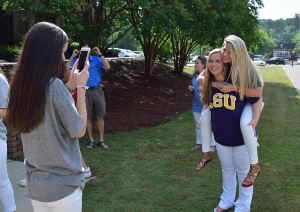 At Stratford our goal is not to package students for colleges but to find colleges that offer the best possible fit for each of our graduating seniors. Our focus is on helping students cultivate their particular talents and interests in ways that will serve them well throughout their lives as well as in the college admissions process. Once their academic and extracurricular strengths and passions are apparent to them, we help seniors zero in on those colleges that will serve them best in achieving their goals.

Stratford students and parents should refer to the College Office Resource button in the upper school student and parent portals for up to date information relevant to college rep visits, local scholarships, forms and specific guidelines pertaining to their particular class and graduation year.

College Kickoff Night for juniors and their parents Subscribe to Alerts
6:00 PM
Mar 2 2021

School Day ACT for Juniors (must have preregistered) Subscribe to Alerts
8:00 AM

What you can expect from the College Counseling Office

What the College Counseling Office expects of Stratford students

Breaches of ethics by applicants
Any breach of the following ethical principles by the applicant or enrollee, or by the secondary school that sponsors his application, may result in a college’s withdrawal of an offer of admission.

Breaches of ethics by colleges
Any breach of the following ethical principles by a college may result in the college’s dismissal from the National Association of College Admissions Counselors (NACAC). Please alert your college counselors if you notice any unethical college practice.

Congratulations to Stratford's Class of 2020

With all of the unusual accommodations schools have made over the last few months, it was one of the goals of Stratford's administration to provide our Stratford seniors with a graduation ceremony which felt as true to the school’s traditional service as possible. Originally planned for May 22, 2020, graduation and the last few months of the school year were not filled with the usual year-end events, such as prom, senior projects, college t-shirt day, and more. Graduation was rescheduled for June 13, following the statewide lift on gatherings, Stratford hosted its first-ever outdoor graduation at the Stratford Soccer Complex.

Unlike previous graduations, guests were limited as each senior received a table of eight and faculty and graduates were spaced six feet apart. The class salutatorian, Sara Kate Durkee, gave her address followed by co-valedictorian, Sean Malhotra. Fellow co-valedictorian, Chimezie Nwabuebo, was unable to attend. Class president Lucy Boswell, student body president Elizabeth Sellers, and Matt Newberry each played a role with the invocation, benediction, and singing of the alma mater. Sixty-nine diplomas were conferred by Board chair, Marsh Butler ’89, and graduates were announced and congratulated by head of upper school, Theresa Ferrari, and head of school, Logan Bowlds. For all purposes, it felt like a traditional Stratford ceremony.

“So much of these students' final months did not take place as anyone planned,” says Ferrari. “It was really important to us to give them a graduation as soon as we could, so they could make that leap to college feeling celebrated by Stratford.”

Following the ceremony, students made their way to the parking lot to take a “victory lap” in their decorated cars around the Stratford loop road as faculty, staff, parents, and guests cheered for them.